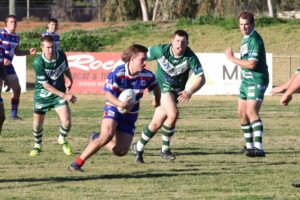 Cobar’s win over Dunedoo on Saturday has given the Roosters the psychological edge in the run up to the finals of the Chris-tie & Hood Castlereagh Rugby League com-petition.
While Cobar may have narrowly won the Round 13 Castlereagh match 26-20 on Satur-day at Tom Knight Memorial Oval, it didn’t however improve their ladder standings with Dunedoo and Cobar now both on 20 points but the Swans have top billing after for and against calculations.
The gripping game between the competi-tion’s two top teams was as expected, a fiery match, and resulted in two Roosters players doing stints in the sin-bin.
Slippery hooker, Thomas Plater, put first points on the board early in the match for the Roosters, sending a clear signal to the visitors that Cobar meant business.
At the 10 minute mark the Swans hit back with a converted try before the arm wrestle continued.
In their haste to claim an ascendancy in the game, both sides squandered a couple of try scoring opportunities before Dunedoo crashed through the Roosters’ defence at the 30 minute mark and the subsequent conversion gave the Swans a 12-4 lead.
The visitors had the opportunity to extend that lead further after Cobar’s fullback Ash Davies was sent to the sinbin six minutes be-fore half time after being penalised for holding in a tackle.
The Roosters luckily regained possession of the ball and their sustained attack resulted in a try to Tim Hillam three minutes out from half time.
David Watson’s conversion attempt was just short of the mark. At the half time break the Swans had a narrow 12-8 lead.
Going into the second half the Roosters con-tinued to dominate possession until Davies was able to re-join the game shortly after the re-start.
Less than a minute after his return Davies well and truly made an impact as he sprinted from halfway to dive over and score under the posts which made for an easy conversion for Watson to give the home side a narrow 14-12 lead.
Tempers flared which resulted in some push-ing and shoving from both sides and, not long after, another Roosters player, Tristan Everett, was sent to the sin bin for a rough tackle.
This time Dunedoo made the most of the absence of a Cobar player and, with an overlap of numbers, they were able to score out on the wing.
The successful conversion gave them back the lead at 18-14.
The tough tussle continued with both sides continuing to make big, hard hitting tackles.
After receiving a penalty close to their line, the Swans elected to kick and they extended their lead to 20-14. That six point lead was however very shortlived
as the Roosters rallied and capitalised on
a Swans error which saw tireless, big front
rower, Gerald Mackay, grab possession and
bust over to score.
Watson’s conversion then levelled it up at
20-all midway through the second half.
With 10 minutes left on the clock, the
Roosters were throwing the ball around looking
for scoring opportunities.
In contrast the Swans appeared flat and were
hard pressed to get the ball out of their half.
When the Roosters came at the Swans’ line
six and a half minutes out from full time, they
had try scoring options both left and right.
The ball was sent left to big Ben Simon who
careened through the flailing Swans defence
to put it down next to the posts.
Watson’s easy conversion put Cobar ahead
26-20.
Shortly after the Swans had an opportunity
to level the scores again however as fatigue
set in they fumbled the ball near the try line.
Sensing victory was theirs for the taking, the
Cobar side kept on attacking while the Swans
were forced to keep on defending.
Dunedoo had one final chance to hold off
defeat after they received a penalty 30 seconds
out from full time, but they couldn’t make it
happen and the Roosters finished with the
narrow six point win.
Cobar was well served by a number of their
players including their Best & Fairest, Plater
(who earned three points), Mackay (2) and
Simon (1).
Playing in the Halfback position, Jim Delboux
had a big game in attack and defence, as
did Everett, Hillam, Davies, Watson and
Ethan Black.
Roosters club president, Chris Deighton,
made a guest appearance late in the second
half after missing much of this season due to
injury. He was pleased to be able to join the
side to celebrate the win.
The Roosters will make the trip to Gulgong
this Saturday and, while a win is expected
(when they last met in Round 5, the Roosters
won 54-10), Dunedoo should continue to hold
top spot as their match this week is at home to
the lower ranked, 7th placed, Coonamble.

The Cobar & Districts Rugby Union Club held an R U OK? awareness event for mental health at their home game on Saturday at Ailsa Fitzsimmons Memorial Oval. Pictured are Kirsty Smith and Jody McCabe from the Western NSW Primary Health Network who gave players and spectators some tips and […]

An excellent field of 60 bowlers

An excellent field of 60 bowlers turned out for the annual Cobar Bowling & Golf Club President’s Day on Sunday. The greens were in tip-top condition as was the spectacular lunch provided by Rhonda Hudson and her side kick Doug. A number of teams from Hillston and Bourke along with […]