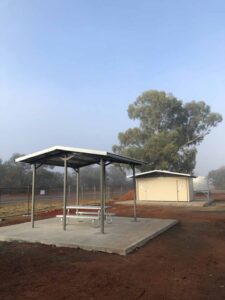 A new toilet block on the Kidman Way between Cobar and Bourke, which former Cobar mayor Lilliane Brady OAM cam-paigned long and hard for, is now open.
The new rest area on the Kidman Way will be of benefit to locals, tourists and freight driv-ers travelling between Cobar and Bourke.
Cr Brady said the facility would also benefit Cobar residents who need to travel to Bourke for various specialist medical treatments.
Minister for Regional Transport and Roads Paul Toole said the $160,000 facility, located 98 kilometres north of Cobar, was the only one along a 161-kilometre stretch to have two uni-sex and accessible toilets.
“There are already three truck stops between Cobar and Bourke, but none of them have bathroom facilities, and residents of both towns have strongly campaigned for additional amenities at the halfway point,” Mr Toole said.
“Leading the charge on this cause was the legendary former Cobar Shire Mayor Lilliane Brady, with the full support of Bourke Shire Mayor, Cr Barry Hollman.
“Sadly, Lilliane is no longer with us, but I’m so pleased her vision to build an amenities block for locals, the elderly, tourists and the freight industry driving between Cobar and Bourke has been realised for the countless people she championed so hard for.”
Member of the Legislative Council Sam Farraway said the new amenities block would be appreciated by all motorists, with about 200 vehicles travelling along this road every day.
In addition to the toilets there is also a picnic table and shelter.
“This functional amenities block will be appreciated by locals, the freight industry, and also by the growing number of tourists visiting the area, particularly the elderly.
“Being able to move quickly and build this facility in just under three weeks, while em-ploying four workers and listening to the con-cerns of both towns, is an achievement we’re proud of,” Mr Farraway said.
Cobar Shire Council Mayor Peter Abbott said he was grateful for the NSW Govern-ment’s funding of the facility and was happy to see it finally come to fruition.
Bourke Shire Council Mayor Barry Hollman said he was very appreciative for the Govern-ment’s support which had “made a significant difference to the lives of so many people”.
“With international travel restrictions still in place, the Far North West of the state is being discovered by more and more tourists and the provision of these amenities to assist everyone travelling through this area is very much ap-preciated,” Cr Hollman said.

Member for Barwon Kevin Humphries has advised motorists of changed traffic conditions on the Kidman Way between nine to 48 kilometres south of Cobar for drainage improvements from this week until mid-December. “The NSW Government has allocated $760,000 for work to improve drainage along Kidman Way at 23 locations as […]

A truck was completely destroyed by fire in a blaze which closed the Kidman Way last Thursday. Local emergency services were called to the fire around 30km north of Cobar at 12.40pm last Thursday where a road train was found to be well alight. The truck driver had escaped unharmed. […]

A section of the Kidman Way near Cobar has been selected as one of the NSW Government’s Western NSW highways to be fast tracked for an upgrade. A number of Western NSW highways have been included in funding allocated to regional roads projects in last week’s State Budget. In addition […]