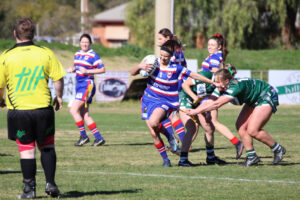 The Cobar Roosterettes went so close to
causing another upset win when they took
on the top of the table, Dunedoo Swanettes,
in Round 13 of the Castlereagh League Tag
competition on Saturday.
After Dunedoo had earlier controlled the
game, the Cobar side came back to level the
scores to 30-all with just six minutes left on the
clock in the thriller match played at Tom
Knight Memorial Oval.
Dunedoo however regathered and went on to
post two late tries to see them through to a
40-30 win.
Roosterettes’ co-coach Jay Egan, who truly
believes he has a winning side this season, said
the girls just need to have more confidence in
their abilities as they have showed in their past
three games that they can well and truly match
it with the top teams.
Returning veteran player Lisa Travis (who
had reportedly retired last season) brought
some additional attacking firepower to the
Roosterettes side this week and, after having a
big game, she earned the Players’ Player title.
The team’s young new recruits also shined in
Saturday’s game with Sandie Mitchell opening
the scoring for Cobar, which gave the Roosterettes
an early lead, and another new recruit,
Neve Carter, also crossed for a try.
Carter had a brilliant game in attack and defence
to pick up the Coach’s Best & Fairest
three points.
Georgia Boland earned two points and Brennah
Aumua and Brianna Watson collected one
point each.
Aumua was once again a try scoring star for
the Roosterettes finishing the match with a
three try haul.
Watson was also a big contributor to the
Roosterettes scoreboard tally adding 10 points
with a try and three conversions.
The Roosterettes head to Gulgong this Saturday
where they should make a good showing as
Gulgong sits below them on the competition
ladder in 8th spot.
The Cobar side is still parked in 6th spot but
with four competition games left to play (and a
bye) they can still make the top five for semis.

On song Roosterettes finish with 22-8 win over Binnaway

After their two close losses in previous weeks, the Roosterettes were on song for Round 3 of the Castlereagh Rugby League competition. They finished with an impressive 28-8 win over the Binnaway Bombshells at Tom Knight Memorial Oval on Saturday. The Roosterettes’ mix of experienced and young new players gelled […]

Best dressed in the field

For the third year running the Ladies Golf team of Jannine Wilkin, Pat Polack and Narelle Kriz have won the ‘Best Dressed’ prize at the club’s annual Pink Day which raises funds for breast cancer