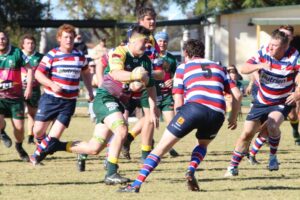 Gulargambone travelled with a full side
including a few subs on the bench to take
on the Cobar Camels in Round 11 of the
Western Plains Rugby Union competition
on Saturday.
The visitors appeared to be in a hurry to get
back on the team bus and head home as the
game was barely five minutes old and they
had posted their first points with a try outwide
which was then converted from an excellent
sideline kick.
The Camels then kicked into gear and repelled
Gular’s continuing raids on their line
before the visitors once again found space
outwide and scored again in the corner.
Gular’s kicker was on target again to extend
their lead to 14-0.
Shortly after the Camels made the most of a
ball fumbled by Gular and Jacob Christie
snatched it up and raced in to score the Camels
first try.
Kody Martin’s easy conversion closed the
gap to 14-7 and it looked like it might be going
to be a close game.
However Gular was keen to wrap it up and
stole the match points from the Camels with
an eventual 45-14 win.
Jay Ellison scored the Camels’ other try
which Martin converted also.
Cobar’s Best & Fairest were Christie (three
points), Martin (2) and one point each went to
Stephen Gillette and Brad Crawford while
Ellison was named Players’ Player.
The game was marred by a serious injury
which required hospitalization for the Camels’
Travis Schintler.

The Cobar Camels were impressive at home on Saturday up against the Brewarrina/Bourke Brumbies side in Round 6 of the Western Plains Rugby Union competition. The match was a high scoring affair with a total of 81 points scored in 80 minutes of play. While the Brumbies may have finished […]

The Cobar Roosterettes suffered a disappointing loss to the Coonabarabran visitors in Round 3 of the Castlereagh League Tag competition on Saturday at Tom Knight Memorial Oval. After having plenty of possession and with the Unicorns only travelling with just 11 players the Roosterettes squandered their 22-10 half time lead […]