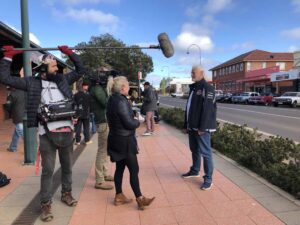 The ABC Television’s Back Roads edition based on Cobar aired last Thursday night and received plenty of positive comments.

Filmed in August 2020, the show’s host Heather Ewart outlined our town’s mining and indigenous history and showcased Cobar in a very favourable light.

In interviews she conducted with a number of locals, including Mayor Lilliane Brady OAM, Heather found out what a great sense of community and support for each other we have in Cobar and how fly-in/fly-out mining was affecting the community.

The segment also featured local sporting events and highlighted the success of our Running On Empty Festival (ROEF).

Scenes were filmed in the main street, underground at the CSA Mine, at the Cobar Races, Mt Grenfell, Tom Knight Memorial Oval and the front bar of the Great Western Hotel.

John de Bruin, ROEF coordinator, was one of the featured locals, and said it had been a great experience to have been involved in.

John reported during their eight days of shooting in Cobar, they “recorded 300GB of data a day, roughly 2.4TB of data, which they  edited  to capture the essence of Cobar in a 30 minute show”.

Is Cobar ready for an influx of visitors?

One local business has been gearing up since June to ensure they are ready for the big influx of visitors expected for the Running on Empty festival later this month. Business owner Trudy Griffiths said she and the her Gumnuts Gifts & Homewares staff began planning back in May for […]

Thousands of car movie enthusiasts gear up to visit Cobar

Cobar is gearing up for the Running On Empty Festival in October, with event co-organiser Ben Hewlett estimating around 2,000 visitors are coming for the weekend. Running On Empty, filmed in 1982, is described as one of the most iconic Australian car movies ever made. It features Mike, played by […]