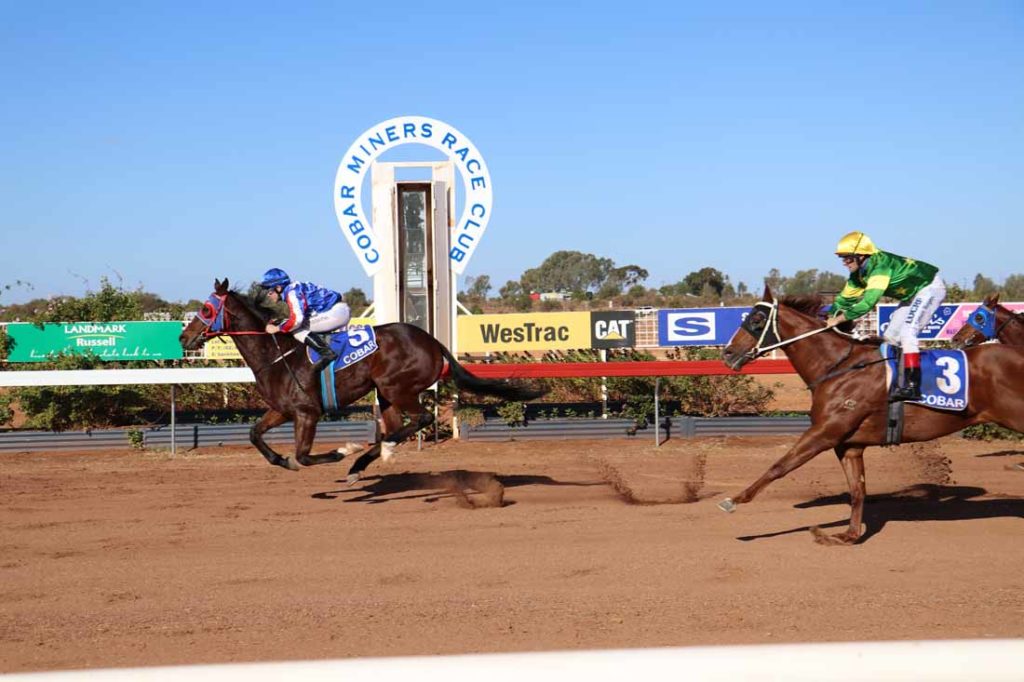 A good crowd was on hand to witness Parkes jockey Tiffany Jeffries win the $10,000 WesTrac Cobar Cup (1700 metres) on the Russell Green-trained Victorian Crown in the feature event at the Cobar Miners Race Club autumn meeting on Saturday.

It was the third Cobar Cup win for Jeffries after having previously won with War Horse for Green (who trains at Wangaratta in Victoria) and with Grimm from the Craig Tyack stable at Tullibigeal.

Victorian Crown has been racing in great form and before Cobar had won successive Picnic Cups in Victoria at Swifts Creek, Healesville and Cranbourne before an unplaced run in the Deniliquin Cup.

Carrying the 61.5kg top weight at Cobar, Victorian Crown shook off Nipper’s Destiny near the home turn then after a length of the straight stride for stride battle with the runner-up defeated Bathurstian (Jamie Gibbons) by a neck with eight lengths to third placed Queen Majesty (Daniel Pitomac).

Raced by a group from Tottenham and Trundle and trained at Nyngan by Rodney Robb, Northern Myth from near last dashed home along the rails to beat Keepcalmandcarryon (Jeffries) and Flatley’s Fortune (James Rogers).

Stravali, trained at Parkes by George Wright, swept to the lead in the straight for a convincing win from See Bling (Rogers) and Artful Song (Rasit Yetimova).

Rusty Motorbike backs up from Louth to win again at Cobar

Rusty Motorbike, winner of the recent Louth Cup (2,000 metres), backed up to win the 1,700 metres Cobar Picnic Cup on Saturday. Given a good run in third spot by Maddison Wright, the Rodney Robb, Nyngan trained Rusty Motorbike ($2.60 favourite) finished a length and a quarter in advance of […]

Cobar hosted the quarterly meeting of the Association of Mining & Energy Related Councils last week, which also included a workshop on Solar Farming. The association advocates for members and their communities on mining and energy related issues to ensure activities are conducted in accordance with the principles of ecologically […]

Chance to tell council your thoughts

Residents who have suggestions, issues or concerns with Cobar Shire Council’s Annual Operational Plan (AOP) are encouraged to go along to tomorrow night’s public meeting. Council is holding a public meeting to hear the community’s input into their 2018/2019 AOP. The plan includes council’s 2018/2019 Budget, council’s Revenue Policy, the […]