A big windfall for Cobar Shire Council last week has ensured that an $11.7million Community Hub can now be built at Ward Oval.

Council was awarded $6.7million last week from Round 4 of the Coalition Government’s Building Better Regions Fund (BBRF) for the construction of an Early Learning Precinct as part of a Community Hub project for Ward Oval.

The funding comes on top of $4.2million Growing Local Economies Funding Council received at the end of last year to build a new pavilion at the oval.

With Council’s contribution of $800,000 and $55,000 coming from community contributions, the $11.7million project will completely revamp the Ward Oval precinct.

In announcing the BBRF projects for his Parkes electorate last week, Federal Member Mark Coulton said he was thrilled that Cobar Shire Council was receive a whopping
$6.8million (for two projects), which is the largest sum of money being awarded to a Parkes electorate recipient under this round.

“BBRF is all about strengthening the local economy, and delivering lasting benefits to our local communities which we know are suffering the flow-on impacts of drought.

“We have secured more than $18.8million for local projects in the Parkes electorate, which will make an enormous difference to these communities,” Mr Coulton said.

“Cobar Shire Council deserves a huge congratulations on receiving these terrific grants – it’s an outstanding success for our region and I’m very excited to see the projects come to fruition.”

Council’s grants officer Brytt Moore was thrilled with the news of the funding last week.

She said the Community Hub project will revitalise Ward Oval, help to solve Cobar’s problem of a lack of childcare facilities and attract more families to come and live in Cobar.

“The aim is to create a community hub by demolishing the existing old buildings and replacing them with a 995m² multipurpose community building/pavilion with kitchen/canteen, amenities/change rooms, dining room and stage,” Ms Moore explained.

Part of the plan is to also construct an 88 place early learning centre adjacent to the existing preschool to meet the demand for early learning places, which would create economies of scale in service delivery and also improve educational outcomes.

“The project is designed to attract families to Cobar and allow parents to work the hours they choose,” she said.

“A lack of childcare has been a major impediment to attracting workers to Cobar. 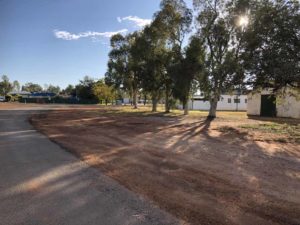 Council conducted a survey last year to support their BBRF application and Ms Moore said from that came an overwhelming response about the lack of child care available in Cobar.

“The majority said a lack of care spaces, and the limited hours of care were a major issue for them.”

She said one responder said it was this lack of available care that made them choose not to have more children as the wait list had taken them out of the workforce for nearly four years. They said it had influenced their ability to grow within their career.

“I am extremely passionate about seeing the Early Learning precinct go ahead.

“Having previously been the director of Cobar’s childcare centre for a number of years, I experienced first-hand the frustration parents went through trying to re-enter the workforce after having children,” Ms Moore said.

She said many parents also told her they would not move to Cobar without first securing child care.

“This project will create an additional 44 Early Learning places.

The second lot of BBRF funding ($67,324)will go towards developing a Town Resiliency Strategy.

“The project will consider the economic development of Cobar and include the attraction and retention of residents to the town,” Ms Moore said.

“In particular understanding the extent of the FIFO/DIDO issue.”

She said Council plans to investigate the medium to long term viability of the community, which has principally been driven by the shift in mining employment from permanent residence to FIFO and DIDO workers.

“This shift has had a noticeable impact on businesses, housing availability, provision of services and infrastructure, sporting and community organisations, and social and community participation in Cobar,” she said.

A crashed plane, injuries, a missing passenger and fire—it all reads like the script of an action movie but that was the scene which greeted local emergency services at Cobar Airport on Saturday. Thankfully it was all just a mock emergency exercise to test and develop the skills of the […]

Round up your old mobile phones and feed the hungry

Cobar Shire Council is helping to recycle old mobile phones by acting as a Mobile Muster collector. There is currently a collection box at the Council chambers where you can drop off your unwanted old mobile phones, chargers and cases. For every mobile phone that is dropped into the recycling […]

Cobar Shire Council’s cash position has improved over the past year. Council’s audited financial statements will be presented to tomorrow’s Ordinary Council Meeting with Council’s director of finance and community services Kym Miller “delighted” with council’s current cash balance. Mr Miller told The Cobar Weekly they had originally planned for […]