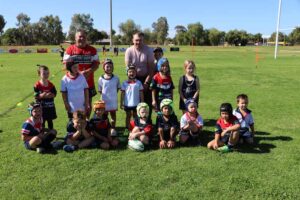 The Cobar Junior Rugby League Under
11s and Under 12s Roosters teams recorded
first round wins for the 2021 Dubbo &
District Junior Rugby League competition
in Dubbo on Saturday.
Six of their seven registered Roosters teams
played their Narromine counterparts in Dubbo
while the Cobar Under 13s had to wait it out
with a bye for their first round on Saturday.
The Cobar Under 11s finished with a thrilling
34-26 win over the Narromine Reds with
Jaxon Waugh running in three tries to help
Cobar to the win.
Also crossing for tries were Rowdy Barton,
Billy George and Aiden Hyland.
Conversions were kicked by Jaxon, Rowdy,
Aiden, Cohan Nicholson and Darcy Sylvester.
Aiden and Lachlan Brookman earned the
Coach’s awards.
The Rooster Under 12s dominated their
Narromine opposition in their game to finish
with a convincing 32-8 win.
Nate Martin led the try scoring with three
touchdowns with tries also scored by Will
Oborn, Kai McCosker and Drew Barton.
Nate, Drew, Rowdy Barton and Cohan Nicholson
each kicked a conversion.
The Coach’s awards went to Kai and Will.
The Cobar Under 10s were narrowly defeated
38-20 in their Round 1 high scoring game
with Narromine.
Cobar’s points came from tries to Jaxon
Burke, Mason King, Harpa Martin and
George MacDonald with Jaxon and Mason
kicking a goal each.
George MacDonald and Rylee Jeffery
picked up the Coach’s awards.
The Under 14s came in for some punishment
from their strong Narromine opposition
with Narromine finishing with a 46-4 win.
Tahj Foley was Cobar’s lone try scorer.
Jaxon Burke and Oisin McMullen earned
the Coach’s awards.
The Cobar Under 16s were also well beaten
by Narromine, 44-6.
Kai Taylor touched down for Cobar’s only
try which was converted by Toby Greenwood.
The Coach’s awards went to Kaeleb Saunders
and Toby Greenwood.
While the Under 9s division is noncompetitive
it was noted that the Cobar
Roosters players scored plenty of tries with
Tommy George and Eligh Ritter both crossing
three times along with Billy Watt who
scored one.
Billy and Eligh both earned the Coach’s
awards.
There was a huge turn out of players and
spectators at Tom Knight Memorial Oval on
Sunday morning for the first round of the
Minis Under 6s and Under 8s competition.
Collecting the Coach’s awards in the Under
6s were Ashton Hyland and Tate Stephens
while in the Under 8s, the Coach’s awards
were earned by Kasalia Fakahua, Kai Prendergast
and George Wainiqolo.
Sport
Page

Hera to provide a community update on Federation Project

Hera Resources, a wholly owned subsidiary of Aurelia Metals Ltd, is progressing its planning of the Federation Project at Nymagee, the plans of which will be outlined at a community information session next month. The Federation Project is a proposed underground mine development located 15km south of the Nymagee township […]