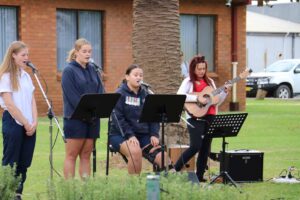 Australian Navy Commodore Ray Leggatt
joined the local community to commemorate
Anzac Day this year.
After leading the street march on Monday,
Commodore Leggatt was invited to give an
address at the service that followed in Drummond
Park.
Anzac Day marks the anniversary of the first
major military action fought by Australian and
New Zealand forces during the First World
War and the service and sacrifice on the Gallipoli
peninsula and on the Western Front over
a century ago and should not be forgotten.
Commodore Leggatt said we should also
look at other more recent events that happened
closer to home.
He said many events in World War II are
more significant to Australia, as the conflict
was not just happening on the other side of the
world, but it was also occurring in and around
our country.
Commodore Leggatt said when Australians
and New Zealanders gathered together 80
years ago to mark Anzac Day in 1942, our
nation was then facing the most direct threat in
their history.
“A terrible war was being raised and it was
on our doorstep,” he said.
“In the two proceeding years the nation had
seen the evacuation of Dunkirk in the fall in
France in May and June 1940.”
The months proceeding April 1942 were
even more awful with defeats in Greece and
Crete, the Siege of Tobruk, the sinking of
Australian warships, Parramatta, Waterhen,
and later HMAS Sydney and then Japan entered
the war with attacks in South East Asia
and the Pacific.
In December 1941 there were defeats at
Pearl Harbor and in the South China Sea and
the new year 1942, brought worse news.
“Most shocking of all, was the fall of Singapore
in early February and the surrender of the
Australian 8th division followed by a frantic
retreat south and west, defeats in the Java Sea
and the Sulu Strait where Dutch, British, US
and Australian ships were sunk, HMAS Perth
and USS Houston in Sulu Strait and HMAS
Yarra south of Java defending fleeing convoys.
“Darwin was bombed for the first time in
February 1942, and in April HMAS Vampire
was sunk in action defending a small British
aircraft carrier, Hermes, off Sri Lanka.”
He said with the advance of the Japanese,
the defence of Australia became “a desperate
maritime campaign put forward by a coalition
of nations by soldiers, sailors and aviators in
the waters and islands to our north, around our
coast, by sea, land and air.
“On Anzac Day in April 1942 the defence of
Australia was at its darkest hour.
“The usual turning points of the war in the
Indo-Pacific—the Battle of the Coral Sea,
Midway, Guadalcanal—only took place in
May 1942.”
Commodore Leggatt said the character of
those who served us 80 years ago, in the darkest
days leading up to April 1942, should be
what inspires us in the future.
“Co-operation in the face of adversity, courage
to engage against an enemy seemingly
without weakness, determination to learn to
overcome and to succeed.
“Their service in the direct defence of Australia
reminds us what really matters.
“Their service guides us to that which is best
in ourselves, encourages us that we can prevail
for the greater good and inspires us to go on to
better and brighter things.
“Lest we forget.”

Cobar High School (CHS) vice captain Sophie Clark has been selected to join the NSW state-wide Rural Youth Ambassador Program for 2022. The 16 year old was selected among a group of 20 students from across rural and remote NSW to join the program developed by the Country Education Partnership […]

Cobar High School has two new faces and also two familiar ones joining the staff this year. At back are new teachers Chris Johnson and John Clarke and at front are local residents, Elsa Mitchell and Amy Thompson, who have joined the school’s Student Learning and Support team. Chris will […]

Transported to Hawaii for the hols

Local music teacher Judy Toomey helped to transport a group of local youth to Hawaii last week at the Cobar Shire Library when she offered students tips on how to play the ukulele. The classes to learn to play the iconic Hawaiian instrument were offered as part of Cobar Shire […]