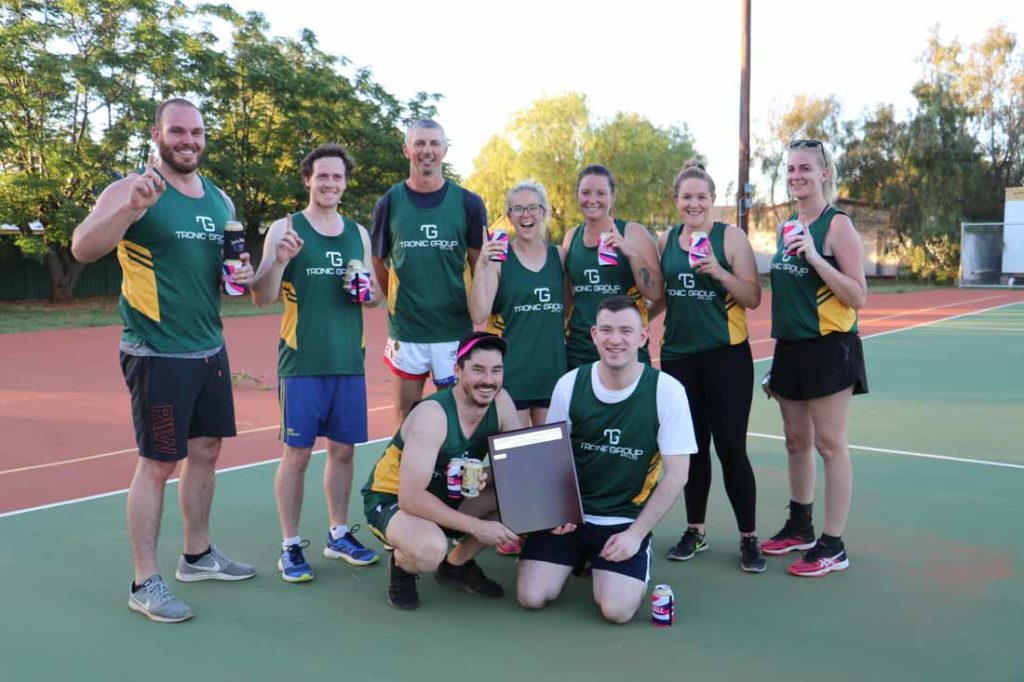 The side, led by captain and sponsor Tom Shanahan, were presented with their winner’s  2020 Cobar Netball Association stubby holders  by club president Haylee Prince at the presentations after Friday’s game at the Ward Oval courts.

After most of the season was played in some “fairly ordinary” weather, the conditions for Friday night’s grand final game were ideal which also helped to bring out a small crowd of spectators to cheer on the two teams.

Norfolk and Chance, having not been beaten all season, were the favourites to take out the title (and their cheer squad was a bit rowdier than the Benchwarmers’).

Norfolk and Chance started off Friday’s grand final in the same dominant manner and, with some slick shooting by Kym Sutton, they had taken a 6-2 lead by the end of the first quarter.

Benchwarmers used their Power Play option in the second quarter (to double their points) and some sharp shooting from Travis Schintler (which included a long range four pointer) saw them grab the lead with the score 14-12 in Benchwarmers’ favour at half time.

It was however the last time they would be ahead with Norfolk and Chance exercising their Power Play option in the third quarter to add another 16 points to their tally which gave them a 28-17 advantage going into the final quarter.

It was a close final quarter with both sides evenly matched up and down the court.

Josh Brown, playing in Centre for Norfolk and Chance, showed plenty of pace around the court which was equally matched by Benchwarmers’ Loma Atuau which made for some fast play by both teams in that final quarter.

Strong defence was also evident by both sides with Steve Nicholson, Chantelle Hamilton and Alex Hernando teaming up to limit Benchwarmers’ shooters Schintler and Sam Vaka to just three points.

Down at the other end of the court, Steve Gillette, Sarah Flynn and Sandie Mitchell were also working hard to shut down the Norfolk and Chance shooters who only added four points in the final quarter.

Sutton was responsible for most of Norfolk and Chance’s points in their 32-20 win however she was well supported in the circle by  Bianka Jacobson, Brown and Joe Regan, (despite  Regan initially taking a bit of time to warm up early in the match before he went on to demonstrate a very stylish shooting style).

Norfolk and Chance was also well served by Liam Richards who towered over his opposition in the shooting circle and the centre court.

See a gallery of images from the games here JKM Dynamic Fitness held out to finish as nine points winners over Pumpettes in the A Grade netball grand final on Saturday while Mystics fought back to claim the B Grade crown with a close 21-18 win over Real Steel. JKM […]