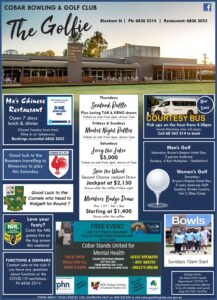 A sizeable 42-6 win by the Cobar Roosterettes on Saturday has catapulted them into fourth place on the Castlereagh League Tag ladder with just one more round left to play. The Roosterettes’ confident win over the Binnaway Bombshells at Tom Knight Memo-rial Oval on Saturday now has them on equal […]

The Far West Academy of Sport (FWAS) Rugby League boys and girls squads celebrated the success of the 2020/21 season with a presentation evening at Club Dubbo on Friday. Special guest on the night was Ronny Gibbs who is not only a founding member of the Academy, but also a […]

Landholders in Far West NSW opposed to the NSW State Government’s proposal to survey for natural gas in their area are breathing a sigh of relief after the Government announced last Wednesday that the proposal won’t be going ahead. The NSW Government’s Future of Gas Statement, released last week by […]