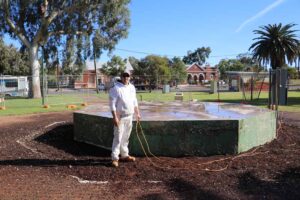 Painter, Clinton Russell, is one of the contractors working on restoring the rotunda in
Drummond Park to its former glory. The transformation is expected to be finished by
the end of the month. Council is undertaking the restoration work using funding
received from the Local Roads and Community Infrastructure funding program. Any
parts of the rotunda frame and roof that can be repaired will be repaired while some
parts that are rusted or worn will be replaced and the cement base will get a fresh
coat of paint. Plans for the construction of the rotunda and a park (which was named
Drummond Park around 1943 in memory of the Reverend Stanley Drummond and his
wife Lucy) were put forward to Council in 1936. Photos from the early 1940s show
the rotunda was a focal point of the park.

Girl Guides give the Commonwealth Bank thumbs up

Cobar Commonwealth Bank employees have donated $500 to the Cobar Girl Guides as part of the bank’s nationwide community donation program. The Commonwealth Bank has again pledged to donate $500,000 nationally, to recognise those organisations that make a difference to the communities in which they operate. Cobar branch manager Donovan […]