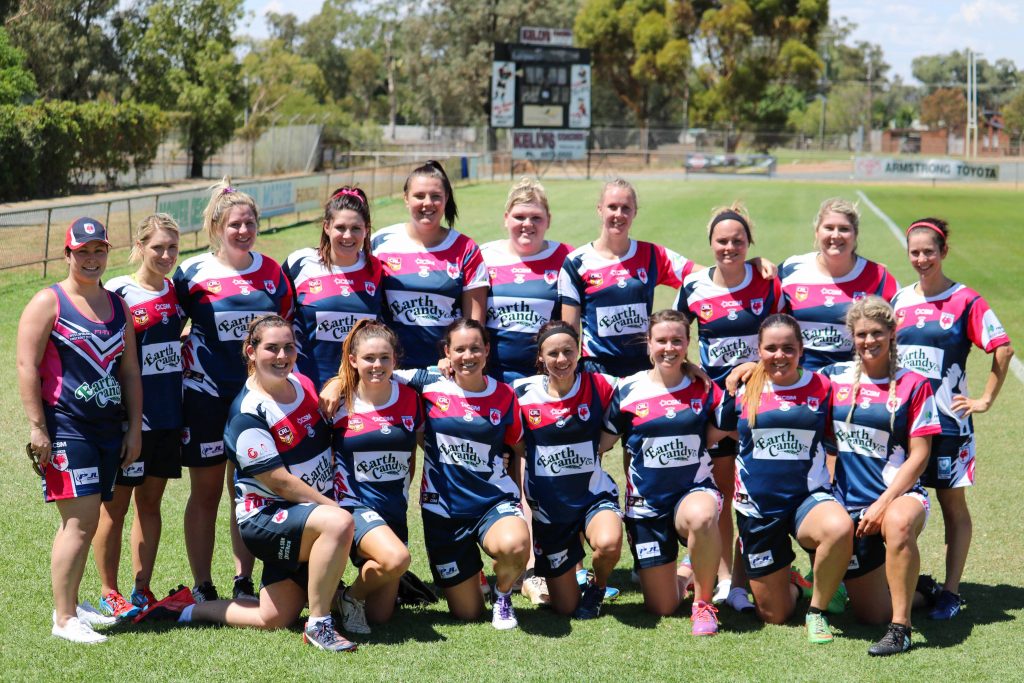 The Cobar Roosterettes competed at the 2017 West Wyalong League Tag knock out competition on Saturday with some new faces in the 2017 team including Rachel Garland as coach.

In their first game against Cootamundra on Ron Crowe Oval they found their opposition were very intense in their defence not allowing Cobar to settle into an attacking rhythm which forced the Roosterettes to kick deep within their own half.

After defending their line for three consecutive sets the Roosterettes conceded first points.

From the ensuing kick restart Coota took advantage of a lapse in defence to race 60m and leave the Roosterettes trailing 12-nil at halftime.

With each half only 10 minutes long, the Roosterettes had some work to do to make it back in the game.

Ball players Zoë Harland and Lisa Travis were creating opportunities for their outside backs in Jennifer Mitchell, Taylah Good and Laura Ah See to break the Coota line but last ditch tags thwarted their attacking efforts.

Cobar’s defence showed improvement in the second half with Naomi Whitehurst forcing errors on the Coota girls when they made it through Cobar’s defensive line, with assistance from Tanya Gilbert on the wing.

A final try by Coota on the siren left the score at 18-0 for the Roosterettes.

With only 20 minutes between games Rachel Garland spoke to the team about the keys of communication in defence, setting their attacking line deeper and supporting each other.

The Roosterettes’s second game was against hosts West Wyalong who had accounted for Cootamundra earlier in the day.

From the outset the Roosterettes showed improved attitude and communication which put early pressure on the West Wyalong team.

With a deeper attacking line dummy half Brianna Watson was supplying quick passes to Tyler Chiswick, Natalie Barnes and Kaitlyn Clark who converted easy metres through the middle of the field.

A slick backline movement to Cobar’s left edge through Nikki Gilbert to Jennifer Mitchell who handed off for Taylah Good to score in the corner was unfortunately called back for a forward pass.

A West Wyalong try against the run of play had them ahead 6-0 at the first break.

The Roosterettes however were upbeat and were very happy with their progress in the game thus far and were keen to continue their development.

Rebekah Harris, Elodie Manns and Emily Claus were continually making it difficult for West Wyalong to be set by running it up and playing the ball quickly to get a roll on allowing room to move for their outside backs.

At full time the score remained at 6-0 with the Roosterette ladies proud of their improved efforts in the second  game.

With the second loss the Cobar Roosterettes were knocked out of the draw and enjoyed a few beverages and watched the other teams do battle for the day.

Yenda beat Leeton in a 4-all tied game in the Cup final.

Yenda was declared the winner after having scored the first try.

Forbes beat the Wagga Wagga Kangaroos
6-0 in the Plate final.—contributed

Roosterettes are through to semi finals

The Cobar Roosterettes Ladies League Tag team kept their semi final aspirations alive in the Castlereagh League competition with a convincing 38-0 win over the Binnaway Bombshells on Saturday. The Roosterettes made the eight hours-plus round trip to Binnaway to play the final round of the regular competition needing a […]

Swanettes fly back home with a well earned win

The Dunedoo Swanettes kept their unbeaten record intact when they came to Cobar on Saturday winning their Round 5 Castlereagh League Tag match with the Roosterettes 42-20. The Roosterettes’ defence found it hard to contain Jacinta Dummett who ran away with five tries to help her Dunedoo side to a […]

The Cobar Roosterettes finished their 2017 regular Barwon Darling season unbeaten following their emphatic 32-8 win over the Brewarrina Googarettes at Tom Knight Memorial Oval on Saturday. The Roosterettes scored in their first set of six through representative player Lisa Travis which was followed up by two tries out wide […]