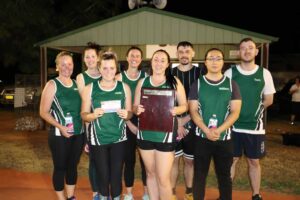 A local netball team who called themselves,
Why Did We Say Yes? (WDWSY),
didn’t need to re-think their decision to play
in the Fast5 netball competition this season
after they won last Tuesday night’s grand
final in extra time.
It was a fitting finish for the two grand final
teams, WDWSY and Watch & Learn, who
ended the season on equal points and had
played two other tied matches this season.
Both sides were missing some of their key
players for the all-important grand final last
week, however both teams did have two subs
each at their disposal.
They were evenly matched on the court last
week—each side had some of the best shooters
and defenders in the league at their disposal
and there was also a great athletic match-up in
the centre court between WDWSY’s Troy Hill
and Watch & Learn’s Tom Plater throughout
the game.
After a somewhat nervous start by both
sides, the score was just 3-2 in WDWSY’s
favour at the end of the first quarter.
WDWSY had elected to play their powerplay
in the second quarter (when all points are doubled)
and their shooters Peta Hill and Janette
Bishop kept the score ticking over with Hill
also sinking a valuable four-pointer in this
period.
Watch & Learn’s shooters Kym Sutton and
Jake Francisco also shot well at the other end
of the court to keep them in contention and the
margin was only two goals in WDWSY’s favour,
11-9, at half time.
With many netball games won or lost in the
all important third quarter, it was expected that
Watch & Learn would have elected to use their
powerplay phase then, however they had chosen
to save it for the final quarter.
The match continued in the same close vein
with WDWSY adding eight points to their tally
while Watch & Learn netted seven goals during
the third quarter.
Using their double points powerplay in the
final quarter, Watch & Learn quickly mowed
down WDWSY’s lead and, with three minutes
left until fulltime, the scores were level at
22-all. Hill had stepped up her shooting another
gear in the final quarter as did Sutton who
sank a late two-pointer to level the scores to
24-all on the fulltime whistle.
As per the rules, a minute of extra time was
then played to find a winner.
WDWSY won the rock/paper/scissors battle
for the right to take the first centre pass in extra
time, which worked in their favour as they
quickly converted possession into a point,
while Watch & Learn failed to score before
extra time was up.
Presentations followed the game with
WDWSY receiving the Fast5 trophy, Cobar
Netball stubby holders and a $200 Cobar
Bowling & Golf Club drinks voucher.
As runners-up, Watch & Learn received a
$100 Cobar Bowling & Golf Club voucher.
There was a tie for the Favourite Fiver of the
competition (which is voted each week by the
opposing team) with Tia Turner (Watch &
Learn) and Jayden Harvey (KML) sharing the
prize with three votes each.

Apollo was the star attraction

David Harrison hosted a SheepMaster Open Day at his Janaree property near Cobar last Tuesday with Apollo 73 (pictured above with David at centre and co-owners Gary Doyle and Mike O’Hare) being the main attraction. Apollo was purchased in November last year for a record price of $85,000 and is […]