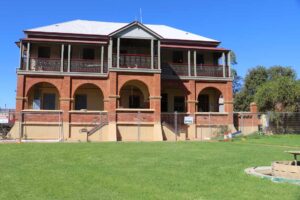 Cobar Shire Council is pleased with the renovation work that is currently under-way at the Cobar Museum building, despite some of the recent negative comments that have been made by members of the public.
Council’s general manager Peter Vlatko said the restoration of the museum building, which is a significant building for both locals and visitors and a major landmark at the eastern entrance to town, is one of the most important projects that Council has undertaken.
“As such we called in a specialist team of experts that included an architect, heritage consultant, structural engineer and a disability access consultant.
“We also have an exhibition designer who is working with staff from Museum and Galleries NSW and our museum curator Kay Stingemore,” Mr Vlatko said.
He said the team was working to the brief that the existing heritage building would be restored to allow it to keep functioning for another 100 years.
The project will also bring the building up to current building standards and codes with regards to fire, safety, lighting, technology and ensuring equitable access for everyone.
The project aims to ensure the heritage fab-ric of the building is respected and some of the lost and hidden elements will be reinstated to allow the building itself to be better seen as part of the history of Cobar.
As part of the upgrade plan, the work will create a suitable space for the curators to tell the stories of the characters and events which make Cobar what it is.
Mr Vlatko said before the work began the community were consulted and appraised of their plans to upgrade the building.

“At our public meetings we called for feed-back and outlined the knowledge and aspirations of the dedicated Council staff who run the Museum (Kay Stingemore and Demi Smith) and we went about trying to make that happen with the funding we received from the State Government,” Mr Vlatko said.
“One of our main concerns was being able to provide access and equity so that everyone might be able to enjoy this wonderful building.”

“The Disability Discrimination Act (DDA) states that all visitors to a building should enter at the same point and be able to access all of the amenities that the building offers,” Mr Vlatko said.
Ashley Dunn, from Dunn & Hillam Architects, who specializes in working on heritage projects in regional areas, said the DDA was the main reason why the new access ramp was added to the building.
“The new access ramp goes to the front verandah and main front door, rather than forcing less able people to enter via a back door or ask for assistance in operating a platform lift,” Mr Dunn told The Cobar Weekly.
“The ramp, which has been designed to exceed the minimum requirements, has been placed to provide access to the front verandah and required a small area of the brick verandah wall to be carefully removed in order to pro-vide access.
“The options explored for a lift would have required significantly more brick wall to be removed on both ground and first floor levels and would also have led to areas of the floor needing to be cut and removed.
“The ramp will be immersed in a new garden gallery which will incorporate some of the large and fascinating external exhibits from the museum in amongst the planting,” he explained.
“The ramp will be the start of the ‘museum journey’ as visitors wind their way up the ramp and are given different views of the objects as they rise.

Mr Dunn said the option to include a lift was investigated and it could still be funded in the future if required.
“With the current funding available, the de-sign team recommended to prioritise the restoration of the building and provide full equitable access to the ground floor (which will pro-vide an equivalent amount of publicly accessible exhibition area to the old Museum lay-out)”, he said.
“The difficulty and cost of installing a lift in a heritage building often does not provide value for money. In this case the estimates were approximately $200k – $300k and would have required additional structural work to the building that made irreversible changes to the original fabric.”
Mr Dunn said while the building is a significant Local Heritage Item it is not a State Listed Heritage Item.
“All work carried out on the Great Cobar Museum follows the strict principles set out in the Burra Charter,” he said.
The Charter, which has been adopted by the Australian Heritage Council and the Heritage Council of NSW, is especially useful when places with a high level of significance (such as the Cobar Museum) are proposed to be con-served or changed in some way, such as when restoring a museum or changing the use of an historic public building.
Mr Dunn said the old exhibitions in the Museum have served their purpose, and had been very well visited and liked for approximately 40 years. He said however some of the old exhibition walls covered over the building fabric and windows and meant that these areas have been neglected for nearly 50 years.
“By removing the exhibition walls, the windows have been opened up and renovated, the badly damaged walls and plasterwork have been restored, the structure has been damp proofed and the original spaces and rooms have been opened up,” he said.
“By cleaning away the old exhibition and opening it up, this grand old building has been given a new lease of life and visitors will be able to experience and appreciate the spaces in and around the building as the original architect and builders had imagined.”
Mr Dunn said the renovation work has ensured access for visitors has been restored to the whole of the ground floor.
“In the previous configuration approximately half of the rooms on the ground floor were not accessible to the public as they were used by staff and for storage.
“The restored configuration of the ground floor will provide the equivalent amount of publicly accessible exhibition space as was provided over two floors in the old configuration.
“The important difference is that all of the exhibition space will now be accessible to all visitors and the original building fabric will be visible and form part of the visitor experience.”
Mr Vlatko said saving the building, which is an important part of our history, had been their biggest priority.
“I can’t wait for the community to come and have a look when all the work is complete.”

Roadsides looking tidier thanks to Peak’s clean up effort

A discarded Tim McGraw CD was among the 80 bags of rubbish collected in a clean up by a group of Peak Gold Mines and Pybar employees last week along the Kidman Way. As part of the Clean Up Australia movement which encourages communities to clean up, fix up and […]

An air service for Cobar is gaining altitude

Regional Express (Rex) subsidiary Air Link, will offer regular commercial passenger flights to Cobar commencing at the end of the month. Air Link Chief Operating Officer David Brooksby confirmed on Monday that it will be offering Regular Public Transport (RPT) air services between Cobar and Dubbo which will connect with […]

Cobar Shire Council staff worked quickly and tirelessly last Thursday morning to rectify the damage caused by vandals last week to the new playground area at Dalton Park. “Overnight the locked amenities block has been broken into and the boxed lighting (which was the last part of the project and […]