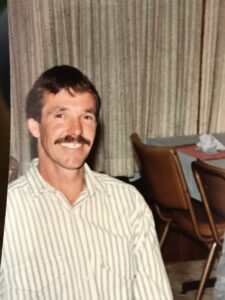 You’d think a person would get bored after working for 47 years in the same field, however that hasn’t been the case for local Robert ‘Bob’ De Jong, who is currently Essential Energy’s longest serving employee.

Since he started his apprenticeship as a linesman’s assistant at the end of 1973 with the Macquarie County Council, Bob’s had three promotions and the company’s had
five name changes—Macquarie Electricity,
Western Power, Advance Energy, Country Energy and Essential Energy, as it is known today.

Bob said it’s the diversity of his job that’s kept him there all this time and needing to be a ‘jack of all trades’ also makes the job interesting.

A line worker’s day could include anything from repairing, replacing or constructing overhead and underground power supply networks, responding to emergencies, reconnections or disconnections, metering or supply quality investigations.

After growing up in the bush, Bob said working outdoors was something that he enjoyed.

After leaving school at 17, Bob worked for 12 months with his father, who was a builder.

“I told him I needed a job where I could make money,” Bob said.

He then worked at Turton’s garage for 18 months before he was approached by Macquarie County Council’s foreman ‘Speck’ Gilbert to apply for the apprenticeship.

“He was involved putting the power on our property years ago where used to live out on the Coolabah Road,” Bob said.

“He knew me and encouraged me to apply for the job.”

After completing his three year apprenticeship (with the theory part completed via correspondence) Bob was promoted to linesman.

In 1993 he was appointed as Leading Hand and in 2002, after initially filling in as the team leader for 18 months, he was officially promoted as Team Leader at the Cobar depot.

Bob said he never really liked being desk-bound and when things became computerized he enjoyed it even less.

After being Team Leader for 10 years he decided to go back to working in the field.

“I’m back where I started as a linesman. I’ve done a full circle and I’m enjoying mentoring the young people coming through.”

The “young people coming through” however have it much easier these days than Bob did when he first started.

Bob recalls none of the work vehicles had radios.

“We had no communication whatsoever.

“The worst and the best part of the job is being out in the bush in storms.

“We didn’t have any winches on our trucks and so if you got bogged you had to walk for miles to get help.”

Bob recalls on one job he had to walk 20km to get to the highway to flag down someone.

He said the biggest changes he’s seen over the years are in the areas of safety and technology.

The geographic area they service has also increased greatly as more and more rural properties were connected to power.

“When I first started our furthest trip would have been Nymagee, so about a 100km radius and back in 1976 we started the line south to Mount Hope.”

Bob could now be working one day in Cobar and the next in Bourke, Walgett, Broken Hill, Forbes or Condobolin.

“Just after Christmas we went down to
Cobargo after the bushfires to help out replacing lines and poles that had all been destroyed.”

Bob did have plans to retire this year, however the COVID-19 pandemic has forced him to delay his retirement a bit longer.

“We had planned to do some travelling, but as we can’t do that at the moment, I might as well continue working,” Bob said.

Cobar cleans up after a massive storm

Cobar residents were still cleaning up yesterday after a severe storm on Monday night dumped 10mm of rain on the town in just four minutes. The storm that directly hit Cobar just after 7pm on Monday brought with it torrential rain (20mm in total) and recorded wind gusts of 98km […]

Essential Energy crews were quick to respond to an unplanned power outage which affected more than 900 households and businesses in Cobar, including parts of the central business district, around 1pm last Wednesday. Manager community relations Northern David Crough said for the safety of the public and their property Essential […]