The award, which recognises achievement by a local athlete at a state, national or international level, was presented to Hannah in recognition of her achievements in netball and Athletics Track & Field.

From there she was selected in the Australian Indigenous School Girls Netball team which competed at the Nationals competition in Melbourne and also in New Zealand.

Hannah was also a member of the Far West Academy of Sport netball team.

In addition to playing netball, Hannah represented Cobar High School in Athletics Field events at State level and was selected for an Australian Sports Travel Athletics tour to compete in Canada.

Cobar High School athlete Ben Griffiths was named as the Sports Person of the Year.

In 2019 Ben had great success competing in athletics at local, interstate, national and international level.

Golfer Narelle Kriz was awarded the Services to Sport accolade for her contribution to various sporting groups, in particular golf.

Over the past year Narelle has mentored junior golfers and acted as secretary for the Cobar Ladies Golf Association.

Narelle is also a long term volunteer with the Cobar Little Athletics Club. 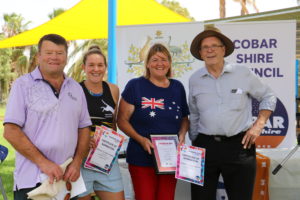 Cobar cleans up after a massive storm

Cobar residents were still cleaning up yesterday after a severe storm on Monday night dumped 10mm of rain on the town in just four minutes. The storm that directly hit Cobar just after 7pm on Monday brought with it torrential rain (20mm in total) and recorded wind gusts of 98km […]

The water temperature at the Cobar Memorial Swimming Pool was a pleasant 21 degrees for the Cobar Yabbies Senior Men’s Swimming Club’s first dip of the 2019/2020 season on Tuesday night. Founding club member Bob Clark started the season off on the right foot with a first up win in […]