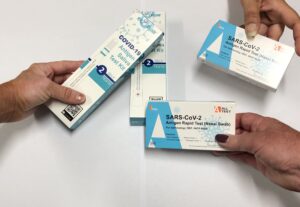 Local schools have received their alloca-tion of rapid antigen tests (RATs) in time for students and teachers to return to school next week.
Around 8.2 million kits have been distributed to more than 3,000 government and non-government schools and early childhood cen-tres across the state over the past week.
The rollout of RATs was a whole-of-department effort from corporate staff volun-teering to work round-the-clock at the educa-tion facility that doubled as a distribution cen-tre to school staff returning early to distribute the kits to families.
St John’s School families have been invited to collect their tests via drive-thru pickup which began on Sunday and continues this week.
Cobar High School will have tests available for pick up from the school’s front office this Friday and Monday.
Cobar Public School will also be distributing their tests this Friday and Monday in the same manner as they distributed their home learning packs last year during the COVID lockdown.
Parents/carers will be advised of the desig-nated time slots they will be able to collect their tests.
Four tests per child are to be issued to par-ents/carers who are encouraged to test their children twice a week, on Mondays and Wednesdays for the first two weeks of school.
Teachers and school staff will also be issued with tests, to be carried out twice a week too.
Testing is highly recommended but not com-pulsory and parents/carers and teachers/staff are not required to report a negative result to the school.
Students, teachers and staff who test positive should stay home and isolate in line with NSW Health guidelines and advice.
It’s expected more tests will be made availa-ble to schools should the need arise.
The general public however are still strug-gling to access RAT tests. Both local super-markets received small deliveries of RATs on Friday (which were quickly snapped up by shoppers) and more supplies arrived yesterday.
The John Mitchell Pharmacy yesterday re-ceived their first delivery of the year however staff report the order was significantly less than they expected and it won’t cover their long list of waiting customers.

The COVID-19 pandemic has prevented members of the Copper City Men’s Shed from meeting twice weekly however it hasn’t stopped them from connecting and working on local projects. Men’s Shed coordinator Gordon Hill said restrictions imposed by NSW Health during the pandemic have prevented Men’s Shed gatherings as many of […]

Community and visitors combine for a special Anzac service

Australian Navy Commodore Ray Leggatt joined the local community to commemorate Anzac Day this year. After leading the street march on Monday, Commodore Leggatt was invited to give an address at the service that followed in Drummond Park. Anzac Day marks the anniversary of the first major military action fought […]

Cobar’s sporting fields are empty and will remain that way

Local sporting fields are empty as most of Cobar’s sporting bodies have been forced to either postpone the start of their seasons or cancel them altogether. All codes are following the tough government restrictions put into place to help slow the spread of the Coronavirus (COVID-19) pandemic. President of the […]