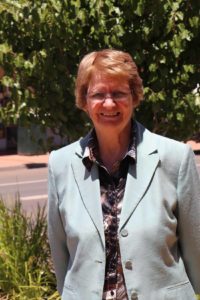 The vote, held to fill the role of councillor left vacant by the departure of Greg Martin, came down to the distribution of preferences with just 63 votes the difference between Mrs Winders and Ben Hewlett.

Mrs Winders finished the election with a total of 835 first preference votes, just behind Ben Hewlett with 892 votes.

The third candidate, John Stingemore, polled 535 first preference votes and was knocked out of the running following the counting of all pre-poll, postal and election day votes.

A total of 2,336 votes were counted in total with 74 determined to be informal votes.

Pre-poll voting proved popular with Cobar residents, with a total of 1,413 people turning up to vote before Saturday’s official election day.

Mrs Winders polled strongly in Euabalong and Murrin Bridge with 58 votes from the two compared with Hewlett’s 34 votes and Stingemore’s 31.

Janine Lea-Barrett is currently the front runner after the first preference votes were counted on Saturday for Cobar’s 2016 local government election. As of yesterday and before the second count of preferences was finalised, Mrs Lea-Barrett looked certain of gaining one of the 12 positions on Cobar Shire Council having […]

Councillors hear of community concerns over mine rosters

Chair of the Cobar Liquor Accord and long time Cobar resident Linda Carter addressed last week’s council meeting about the damaging effects of mine work rosters on the local community. “Because of these rosters and the FIFO and DIDO [fly in/fly out and drive in/drive out] workers, we no longer […]

Locals have input on economic plan

Local residents from a diverse cross section of the community have provided input for a State Government regional economic development strategy. Following on from a NSW Government economic survey that received a good response from Cobar residents at the end of last year, members of the community were invited to […]