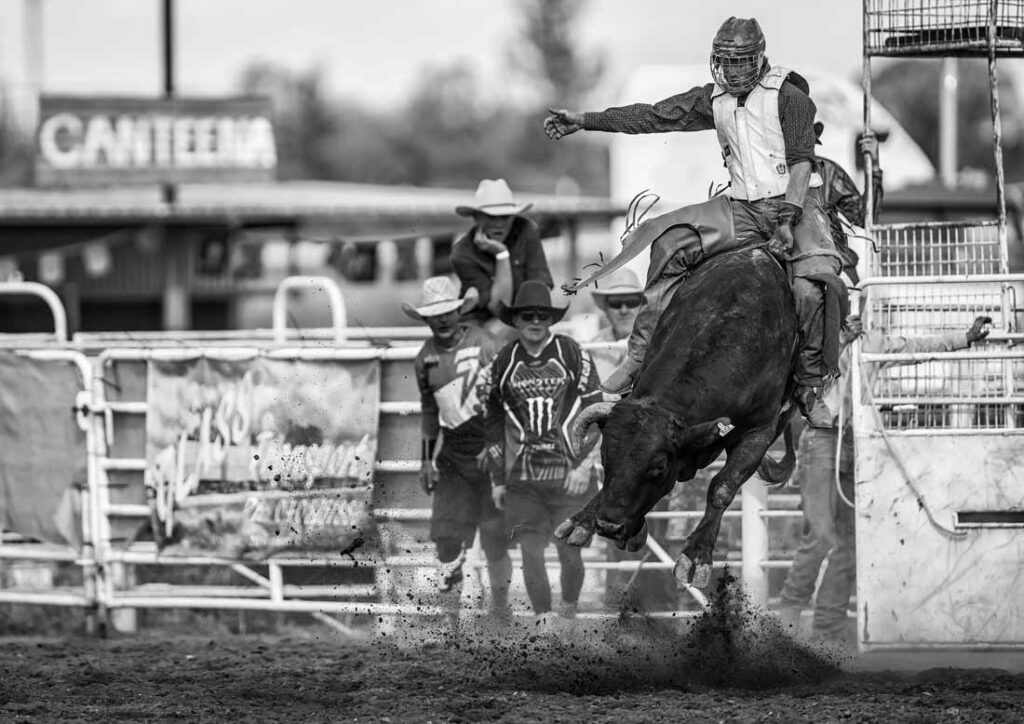 A photo of a bullrider taken at last year’s Cobar Rodeo by local photographer Klae McGuinness has finished in the top 30 in the Mono Awards, a prestigious Australia and New Zealand Black and White photo competition.

While Klae’s rodeo photo hasn’t won him any prizes, it will be part of the Mono National Gallery tour and give him a bit more exposure.

“Black and white is not really my thing,” Klae admitted to The Cobar Weekly.

“But in saying that, I’ve got nothing against it.”

“We see in colour, colour is very dramatic especially out here in the bush.

“But in a way black and white tends to take distractions out, you don’t have colours in the background grabbing your eye and you tend to focus on the subject more.

“It’s all about the tones and contrast that make up a good black and white photo,” he said.

“I think the appeal of black and white is the timelessness of it—this photo could have been taken last year or 50 years ago.”

Klae said it took a bit of procrastinating to pick which one of his photos to enter.

“I noticed that a photo taken at a rodeo had finished in the top 10 last year and I thought I’ve got some that are as good as that.

“I like this sort of stuff because it’s not easy,” Klae said about shooting photos at the rodeo.

“You don’t know what’s going to happen, which way the bull’s going etc, it’s all about camera control.”

While it is a great photo in colour, after Klae made it black and white you still notice that there’s a rider on a 700kg bull in the air, but you also see a lot more details about the picture—that the dirt is kicked up off the ground, there’s rust on the chute fence and you can see all the fine details on the bull rider’s shirt.

Klae said he hasn’t been keen on entering photo competitions in the past.

“I think art is in the eye of the beholder and it all depends upon what a judge likes.

“But I have been encouraged by the exposure I’ll get from this competition and may enter a few more.”