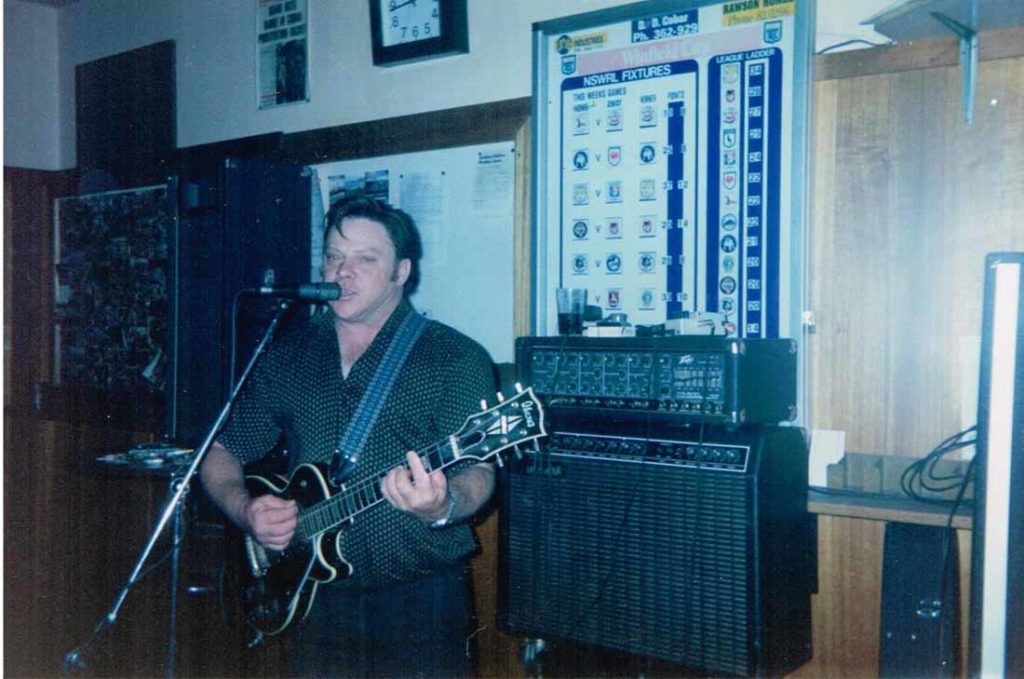 In a music career that spanned 50 years Keno Josephson played with, and mentored, tonnes of local musicians, many of whom will be back in Cobar next month to honour the local legend again at the Keno and Friends Tribute Show on September 7.

Cobar born and bred Gary Leo Josephson, known to all as Keno, started playing music at the age of 12 when he took up a two string Martin guitar.

The self-taught musician moved onto play both acoustic and electric guitars and his favourite instrument was a rare old black Les Paul Gibson copy guitar.

Coming from a musical family, it was in Keno’s blood to play music and entertain and that was what he did for half a century up until his death on September 1, 2012.

Fellow local muso Gavin O’Donnell, who played numerous times with Keno and knew him well, was the instigator behind the first tribute show held in 2015.

Gavin has decided to organise another tribute night, this time called ‘Keno and Friends’, in response to interest from a number of people who were “asking when the next show would be”.

Gavin said a lot of current and former Cobar residents view Keno as a “local legend”.

“Brad Wynd coined the phrase “Memphis had Elvis—Cobar had Keno” and I think that sums it up well.

“He’s still fresh in our memory, people still remember his songs, and people still talk about him,” Gavin said.

Following the first event Gavin worked with Jade Martin to write and produce a single called “Cobar Had Keno”, which will be available at the upcoming event.

“Like the first event, a lot of people have shown an interest and we’ve ended up with a lot of local and former local artists on the bill again,” Gavin said.

He said all were keen to pay tribute to Keno’s memory.

Keno had a long list of songs in his country rock repertoire and could play and sing just about anything.

Gavin said he appealed to a wide audience.

“From shearers to managers, everybody loved to listen to him. He could read a crowd, he was a real good entertainer. I think that’s why people connected with him.

“He’d put you into a song and change the lyrics, he was very quick witted.”

Keno’s tribute show kicks off mid-afternoon at the Services Club, and is expected to go late into the night with local and former local artists Brad Wynd, John Peebles, Les Arnold, Chic Simpson and Jade Martin among those on the bill.

Also making an appearance are a number of the Josephson family members including Beeza, Dallas, Blue Dog, and Shane, as well as Keno’s nephew, Jamahl Hamilton.

This year’s event also pays tribute to other well-known Cobar bands and musicians of Keno’s era such as George McLean, The Confederates and The Tymekeepers.

Gavin said before the first event in 2015 they had come up with more than 90 songs that Keno used to play, and now that list has grown to around 200.

He said each muso has chosen two or three songs they will perform at the tribute show and people will also be invited to share their stories and yarns about Keno on the night.

While there won’t be a cover charge for the show, Gavin said there will be a commemorative booklet available on the night for purchase.

“We will also have the ‘Keno Live at the Western’ CD for sale on the night,” Gavin said.

“I recorded him one night at the Western and put 15 songs on a CD.”

He said he then gave it to another local muso, Jade Martin, who worked “some magic” on the original recording and digitally re-mastered seven of the songs.

“Jade spent hours and hours on it and it sounds pretty good,” Gavin said.

Gavin said he and a number of other local musos are really looking forward to catching up and sharing a few stories about the man that to them was a local music legend.

For more information about the show see the advertisement on Page 3 of this edition.

Cooee March, trained at Griffith by Russell Hogan, and Late Return (from the Wayne Marsden stable at Menindee) have now qualified for the $50,000 Picnic Championship Final at Dubbo after winning at the Cobar Picnic Races on Saturday. With TAB coverage and being held at the Dubbo Gold Cup meeting […]

Cobar lady golfers can now boast having the NSW 2019 Sandgreens Champion in their ranks after Jenny Stephenson took out the event in Narromine on the weekend. Affiliated with both Cobar and her home club in Broken Hill, Stephenson plays a number of tournaments on Sandgreens under […]

The fourth annual Cobar Picnic Races was held on Saturday with locals enjoying the social aspect of the day. Among the drawcards this year was a visit from legendary Melbourne Cup winning jockey Jim Cassidy, who also socialised with the crowd at Friday night’s Calcutta at the Empire Hotel. Spotted […]