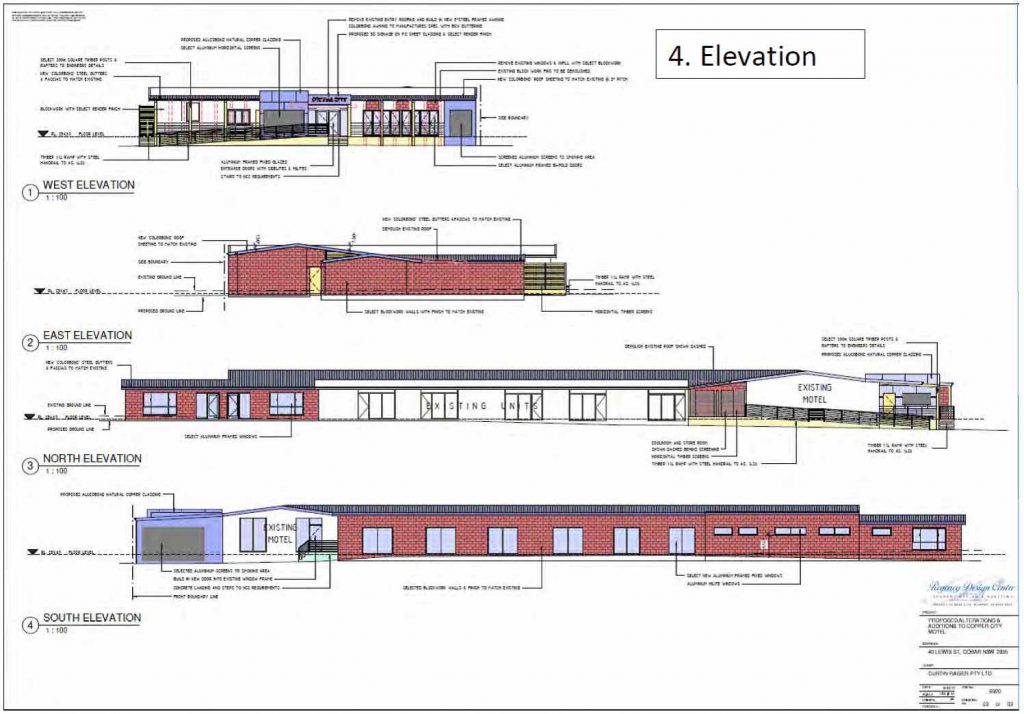 Cobar Shire Council has given the green light for proposed extensions to the Copper City Motel including a change of use for the restaurant to become a pub.

The development application (DA) was referred to council following the receipt of an objection to the project.

Councillors at Thursday’s extraordinary meeting considered the 202 page report prepared by council’s planning and environmental department on the proposed development with all councillors present at the meeting voting in favour of the development going ahead subject to a list of 30 conditions.

The report made 29 recommendations (and councillors added one further recommendation at last week’s meeting) for changes to the application before final approval.

Council’s director of planning and environmental services Garry Ryman told The Cobar Weekly that imposing 30 conditions on a project of this size and complexity was not unusual.

“This application involved food, it involved a liquor licence and a number of other things,” Mr Ryman said.

“A number of the conditions were general while others were specific to the application.”

He said in NSW some councils can list over 100 conditions on an application to build a house.

One of the conditions of approval was that a further 34 car parking spaces be provided as part of the hotel/motel complex.

Mr Ryman told the meeting there was enough vacant land available for the owner to develop to accommodate an extra 34 vehicles.

Copper City Motel owner Scott Smith told The Cobar Weekly on Friday it’s been a long process but he was pleased with the outcome of last week’s meeting.

“Now we need to get it up and running.”

Mr Smith said he had submitted his DA back in February and was surprised with the amount of work that needed to be done before it would be considered for approval.

“There was a lot more involved than I thought as we had to do a traffic study and noise study,” Mr Smith said.

While he has no objections to the conditions, Mr Smith was surprised at the recommendation for an additional 34 parking spaces to be included on the site.

“We considered there was plenty of parking in the area, in the side streets and there’s ample parking at the front.”

Mr Smith said he hoped his construction team would have all the DA requirements sorted within the next four weeks and they could obtain a construction certificate to commence work.

He said they are planning to do the work in two stages and would like to see the pub open and running before the end of the year and that the conference facility construction would commence early next year.

“We’ll now work to knock out the 30 conditions and then it’s full steam ahead,” he said.

Cobar Shire Council’s cash position has improved over the past year. Council’s audited financial statements will be presented to tomorrow’s Ordinary Council Meeting with Council’s director of finance and community services Kym Miller “delighted” with council’s current cash balance. Mr Miller told The Cobar Weekly they had originally planned for […]

Sharon Huon, the Lilliane Brady Village’s director of nursing, has been an institution at the local retirement home for almost 30 years but now says it’s time for her to retire. Mrs Huon gave her employer, Cobar Shire Council, almost 12 months notice of her impending retirement as it was […]

An idea that came up in a Cobar Shire Council workshop, the Grey Mardi Gras, is already getting plenty of attention. Cr Bob Sinclair’s idea for a unique festival for Cobar is also getting plenty of funding with Federal Member for Parkes Mark Coulton visiting last week to hand over […]