Fire & Rescue NSW Station 256 has recently taken delivery of a new weapon that will be lethal when it comes to fire fighting.

The brigade members this week have undergone training on the former Public Order and Riot Squad vehicle which was gifted to Fire & Rescue from the NSW Police Force.

The 12,500L bulk water tanker was previously used by the police for crowd control and as a barricade and arrived full of water.

Station 256 Captain Tony Walkinshaw said NSW Police had identified that the vehicle would “service a more useful purpose as a fire appliance”.

The Cobar station was chosen to house the tanker as part of Fire & Rescue NSW’s strategy for the western area due to imminent water shortages and will be able to respond to fires not only in the Cobar area but also in the
nearby towns of Bourke, Nyngan and Brewarrina.

Fire & Rescue NSW has deployed another bulk water trailer to the Warren station to ensure the entire western area is covered.

The Cobar crew were all keen to learn the ropes of the new tanker which only has 20,000km on the clock. 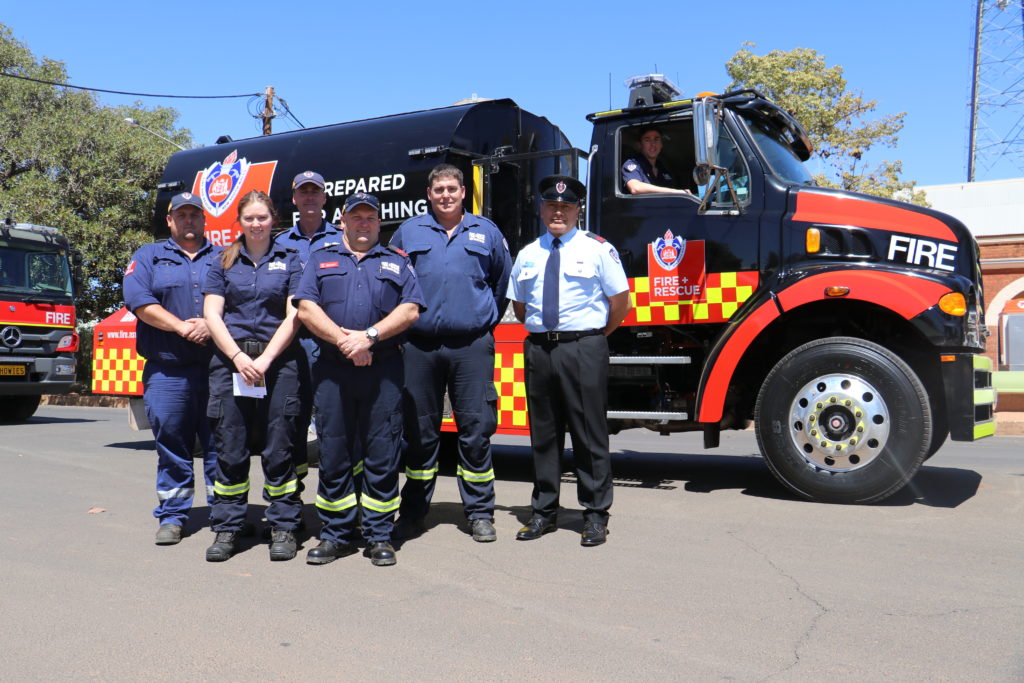 Calls to fires and vehicle accidents are the norm for the Fire and Rescue NSW Station 256 Cobar crew however the rescue they were called to on Sunday was definitely out of the ordinary. A wounded wedge tail eagle was located on a property in Singleton Road with the owners, […]

Former Cobar Fire Station 256 brigade captain Colin Jones passed away on Saturday after a very long battle with cancer. The 45 year old father of three died peacefully in the early hours of Saturday morning at his home surrounded by his family and friends. He is remembered as a […]

Local firies get on board with aircraft safety procedures

Local firefighters were recently invited to learn about FlyPelican’s aircraft safety procedures. Cobar Fire Station 256’s deputy captain Alex Lennon said members of the brigade underwent a familiarisation of the airline’s aircraft and the company’s safety procedures so that in the event of an emergency, they would be able to […]