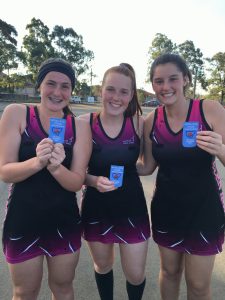 Cobar junior netballers Zoe Carter, Abby Carswell and Lauren Urquhart joined the Under 17s Glen Innes team to contest this year’s Netball NSW State Championships over the weekend and helped their side to a Division 3 win.

Glenn Innes coach Maryanne Perkins said she had been very pleased to welcome the three Cobar players into her Under 17s team.

“Most of the teams we’ve been playing against play together all the time. We haven’t even trained together,” Perkins said.

“The first game was a bit iffy, and then after that fantastic. They listened really well to feedback and took it on board. We play quite a different style to what they are used to, but they picked it up quickly. It’s like it’s one big unit that has always been together. I could substitute any of them and it worked really well,” Perkins said.

She described Zoe, who was playing in defence, as “a real bulldog”. “She hunted down the ball, and had great defensive pressure.”

Perkins praised Lauren’s commitment on court and said she linked in well with their two other shooters.

“I loved Abby in Wing Attack and she stepped up to Centre when our Centre was injured. Abby’s got really good vision, and reads the game really well,” Perkins said.

There was a good roll up of 14 interested people to the Cobar Blues Football & Netball Club’s annual general meeting on Sunday at the Cobar Bowling & Golf Club. There was however no interest shown at the meeting from the club’s AFL fraternity of players or the Auskick junior […]

Cobar netballers had great results at the Netball NSW 2017 State Championships over the long weekend at Baulkham Hills in Sydney. The Cobar Opens team competed in Opens Division 2 finishing with eight wins for the tournament while three Cobar juniors, who joined the Glen Innes team, finished as winners […]

Two Cobar Blues representative netball teams competed at the Regional State League carnival in Orange on Sunday. The Cobar Juniors side competed in Division 4 winning two out of their three games, while the Cobar Opens side went down to their Orange and Bathurst oppositions in Division 3. “The Junior […]